Has anyone been falling short of there full charge mileage? 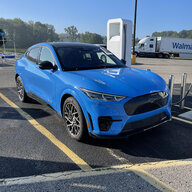 The range meter is known as the "Guess-O-Meter" or GoM. Fords is pretty pessimistic. It is not actual range, it is the range the car is guessing. Actual range depends on a ton of different factors. You may very well get 300+ miles of range depending on your driving habits.

Going 80mph on the interstate is going to have a lower range than 45mph around town (unless its super cold maybe). 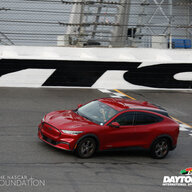 Member FP Club. "Have you cherished your FOB today?"

I know this is debated, but personally I *LIKE* that Ford isn't playing the same game the other EV mfrs are. Sure, it makes direct-on-paper comparisons more difficult (and less favorable for Ford, btw), but if the choices are "You might get this range downhill with a tailwind" and "This is probably a middle-of-the-road/pessimistic estimate" I'll take the latter.
That said, I totally get the "play the same game as everyone else" argument. YMMV

B Gray said:
Has anyone been falling short of there full charge mileage?

I have put on 900 miles and have done 4 full charges and two part
Click to expand...

If you want a better predictor of the range than the one on the driver display, go to your Trip Meters page. Look at what you've been experiencing on the meters for miles/kWh. Take that and multiply by 88 (ER battery capacity) or 68 (SR). That's a better range estimate for that same type of driving and weather conditions.

I'm keeping Trip2 as the life of the car for now. After 654 miles, I've crept up to an overall average of 3.0 miles/kWh, after initially being around 2.5. But it was colder the first week, and I was spending a lot of time in the car just sitting while checking out settings. I was also driving more "fun" with it. Now I'm settling into more regular driving. There's a good mix of 75 MPH highway in there, 50 MPH mountain, and some city. Not getting full range after charging

Idling vs. Short trip, turning car off and on