Link to story: Ford forbids dealers from advertising below Mach-E’s MSRP in effort to prevent bait-and-switch
Click to expand...

I really do hope this is how buying of the MAch E will be cause its a no hassle buying experience. Which I am sure we all love. I like how they are taking the Tesla way of buying a vehicle even though it is up to the dealer themselves. However, if they do not use the method provided by Ford company they will not get the benefits as FordCo has mentioned so it will be in the Dealers better interest to make it a much better buying experience. Shop Online, Buy Online, go to dealer sign paperwork drive off with car. No renegotiating needed.

You can only hope this is the experience you get but all it takes is one salesman who wants to get something extra or thinks he can take advantage of you really wanting the car to ruin your experience.

4pac said:
You can only hope this is the experience you get but all it takes is one salesman who wants to get something extra or thinks he can take advantage of you really wanting the car to ruin your experience.
Click to expand...

That is true @4pac but then you can always walk out the door/refuse to take delivery of the car before you sign the final papers. Then they lose a sale and possibly future business from you. Cause you will have all your information transferred to another dealership.

"The price is the price" approach will only work if the price is realistic. MSRPs have been so inflated in recent years on trucks, SUVs and CUVs that we often see dealers offering discounts of thousands of dollars. That means that the invoice is not MSRP, a ploy that any educated buyer will balk at. I say let negotiations begin, especially with the high prices, just like is done on purchasing property.

More publicity oriented than reality. Impressive would be limiting the markups , good luck on that ! Worst case scenario for Ford is people still in showrooms, get a great deal on a normal car. All conjecture, wait until actual promised deliveries start, hopefully Ford delivers , maybe the last chance for them.

s7davis said:
That is true @4pac but then you can always walk out the door/refuse to take delivery of the car before you sign the final papers. Then they lose a sale and possibly future business from you. Cause you will have all your information transferred to another dealership.
Click to expand...

Thats true but its more of an inconvenience for me than it is for them. Plus if they actually have possession of the car and then you walk away from the deal and want to get it somewhere else, Im sure they can make it hard and not release the car in a timely fashion. Unless you like haggling or need to feel like you got a deal, Id rather just know the price upfront and pay it (aka Tesla) 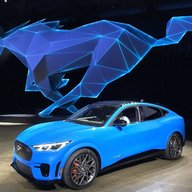 Administrator said:
Ford seems to realize that it can't properly compete against Tesla if its dealers are left to their usual pricing antics. Would be nice to also hear corporate forbid dealers from ADM (price gouging) pricing.

So far, the Ford Mustang Mach-E has already proved itself a success for the Dearborn automaker. After livestreaming the debut to 140,000 online watchers, the recording of the debut has been watched online more than 6.5 million times, and 1.6 million visitors have landed at the Mach-E website. Ford's U.S. marketing chief told the Detroit News the company has never seen those kinds of numbers. Furthermore, conquest buyers are heading to Ford dealerships a year before the first of the electric crossovers are due on the market; a dealer outside Phoenix said two-thirds of the 47 people who've made reservations with him are new to his dealership, some also new to electric cars. In an attempt to keep customers happy once the traditional car shopping experience begins, CarsDirect reports that Ford wants to forbid dealers from advertising the Mach-E below MSRP.

The revelation came out of a dealer bulletin, Ford explaining the restriction by saying it wants to "be competitive in the battery electric vehicle space by transacting in the way customers want to transact." CarsDirect thinks that could be a reference to Tesla's 'the price is the price' method of selling cars. It could, however, simply note that most customers don't like haggling, and detest bait-and-switch advertising that (effectively) lures shoppers to dealerships.

Since dealers are franchisees and can advertise any way they wish — such as the recent guns, Bibles, and flags promotions — Ford can't prevent dealers from advertising below MSRP; so-called Minimum Advertised Pricing is voluntary. And the dealer can sell the crossover for any price he or she can get, above or below MSRP. But dealers that toe the line on advertising will be rewarded with one of three planned allowances. In the beginning, at least, the first of Ford's allowances pays an amount for each Mach-E delivered, the second is a reward for adhering to the advertising prohibitions, the third is an incentive for a dealer maintaining certification to sell EVs.

Also, to head off the counter-tactic of shoppers holding invoice pricing hammering a dealer for a discount, a new Ford tactic called "e-Invoice" will show invoice and MSRP as identical. We have a lot of questions about that, which we've posted to Ford. Stay tuned for details.

With the Mach-E being a critical launch in a segment that OEMs are still getting up to speed with, and the Tesla Model Y due around the same time the Mach-E Select trim arrives, Ford wants to remove as many potentially sour elements as possible for customers and for dealers.

The e-invoice price is where invoice & MSRP are the same. I delivered a 2019 Ford GT this October where this was the case. Reserving, specing , & ordering the vehicle was a one-on-one between the customer & Ford. The delivering dealer was chosen by the customer & pricing set by Ford. Ford payed the dealer a flat for delivery & there were no negotiations. This would eliminate all negotiations plus no X,A,D or Z-plan deals.
Interesting! Due to the way the franchise laws work in the USA there is always the problem of a dealer wanting to slap on ADM and ruining the whole purchasing process, but the bean counters at ford know full well that when it comes to getting a BEV people currently have a hassle free options and will just go elsewhere to the competition.

As per the ford GT above, this is what has been rumored for a while MSRP is the price no markups or mark downs dealer gets a bonus for each vehicle they deliver sure that means no discounts but also means no chance of ADM and ford can certainly play hardball with dealers that don't want to play fair without breaking any franchise laws, oh dear what a shame it would be that a plant scheduling issue has resulted in a dealers whole allocation of vehicles being delayed

Lets hope this purchase it from ford and ship to dealer of choice pans out to be the way of ordering the mach-e so the days of having to deal with a glorified middle man can finally end and car purchasing can enter the 21st century.

I reserved my Black Premier last week and asked my dealer to put in writing, on company letterhead (which he did) a statement saying that he would not be jacking the price over the MSRP, that he would not charge me a dealership fee other than a possible $100 transaction fee, and that he would honor the Ford MSRP if it is lower than the currently advertised amount. That statement is in my file along with a picture of the car and my reservation number (which I shot off the internet at the time of placing my $500 deposit.

So ford is letting their dealers haggle with the price as per this report. Of course it isnt going to be lower for at least the first year, but they arent going to insist not to mark it up either. Is it no wonder people hate the dealer?

If you have sensible dealers in your area it is not going to be an issue, but can't say I have that around my ADM infested neck of the woods. The moment the dealer wants to charge over msrp even by as little as 1 cent it is a lost sale as I walk away.

The point at which the mach-e ends up being freely available on dealers lots so there are more purchasing options to chose from will no doubt be at the point which any tax rebate has long gone which is the only thing keeping the price competitive with tesla.

Ford talks big about making the purchasing experience what BEV customers expect, they need to follow up those words with actions as I am not putting up with ADM, never have and never will. The mach-e is not the only game in town the Model Y and Polestar 2 are viable alternatives both of which follow hassle free online purchasing so take note Ford and sort it out.

Why does Ford include Delivery Fee in MSRP?

Yesterday at 4:55 PM
Mgayle83
Question: How can I get multiple "bids" from different dealers?