PLEASE FORD offer this in one of the US auto shows! This is the next best thing to actually driving away with one.

Ford will strap potential Mustang Mach-E customers into a rollercoaster-style ride to experience the accelerative force of its debut electric vehicle (EV) as part of a roadshow set to promote the new model across the UK.

The blue oval kicked-off its programme of model electrification with the European launch of its first battery electric vehicle, the Mustang Mach-E, at Ford’s Go Electric roadshow in London, ahead of the tour, which has been designed to reach an estimated audience of 4 million consumers across 50 stops, over 200 days.

Ford dealers can collaborate with the brand at events, hosting test drives or capturing the data of consumers visiting the event. In addition, Ford can make a mobile unit available to dealers for other activities.

The Go Electric event will feature a range of hands-on activities designed to engage consumers and help demystify the process of electrification that Ford is currently in the process of embarking on, including the ‘ride’ that involves strapping the customer in a seat, then propelling them forward at the same speed of a Mustang Mach-E, to demonstrate the car’s acceleration capabilities.

Ford said that the aim of the roadshow is to inspire confidence in consumers who have concerns about the suitability of electrified cars and need more information about the different types of electrified powertrains available and their different benefits.

Earleir this month AM reported that Ford was among many manufacturers to admit that they are Carmakers ‘no longer agnostic’ about car buyers’ drivetrain choices.

The move comes as OEMs battle to mitigate the impact of 2020/21’s EU CO2 emissions regulations which stipulate a 95g/km average fleet output and a fine of €95 per gram, per vehicle sold above that level in the event of a breach.

A recent survey commissioned by Ford found that while three-quarters of buyers aspire to own an electrified vehicle at some point in the future, 40% claim to have little or no knowledge of electric vehicles.

Stewart Rowley, president of Ford of Europe, explained how the roadshow would address this disparity. He said: “We made a commitment to make electrification relevant and attainable for more drivers than ever before. Our Go Electric roadshow will help consumers understand that electrified vehicles are ready and waiting to slip seamlessly into their lives.”

The all-electric Mach-E is available for customers to order now, with first deliveries expected in the fourth quarter of 2020.

It will be launched with two battery pack sizes and two power outputs (an even higher-powered version, badged as a GT, will go on sale later): an entry-level rear-wheel-drive version will be equipped with either a 75kWh battery and 254bhp motor or a 99kWh battery and 285bhp motor, with ranges of around either 280 or 370 miles, respectively.

Alternatively, an all-wheel-drive version, which is fitted with two motors (one on each axle), is offered with the same 75kWh battery/254bhp, or a 99kWh battery and peak performance of 332bhp, resulting in estimated ranges of 260 and 335 miles.

The Mustang Mach-E is the first car to go on sale to the general public to be developed by Team Edison, Ford’s group of 70 people who are working at the company’s Detroit headquarters on the firm’s next generation of electric vehicles.

Guests at the launch were given passenger rides in early prototypes of the Mustang Mach-E.

In the congestion of central London, opportunities to see the full potential of the car were limited – especially the sporty characteristics that Ford says the car retains from the muscle car progenitor, with its Whisper, Engage and Unbridled driving modes.

However, in the kind of stop-start traffic that is the natural environment for an EV, it proved to be quiet and comfortable, while the chance to show off its pace in a straight-line sprint – in a cordoned-off underground car park – proved that it had the kind of speed from a standing start that tends to impress potential buyers when they first experience it.

Ford has announced that will launch 17 electrified vehicles in the UK before the end of 2021.

The shift to electrification could coincide with a re-shaping of Ford of Britain's UK retail network. AM reported last week on suggestions that the brand is currently in talks with its franchised partners as part of a bid to accelerate the “natural erosion” of its network.

Alongside the Mach-E and an all-electric Transit, we will see a range of models in showrooms, using a variety of technologies.

In addition, there will be self-charging hybrid versions of the Mondeo, Kuga, S-Max and Galaxy, plus plug-in hybrid variants of the Kuga, Transit Custom and Tourneo Custom.

Check out his face on the ride LOL I think my face would look like Robert's as well. 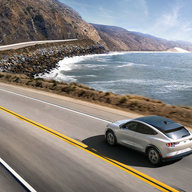 That's under WLTP standards which are not as "accurate" as EPA but Taycan does better than EPA...it just varies by your actual speed and driving style.

If its anywhere close to the feelingI get in my remapped Alfa 4C, I'll be ecstatic! (I've got the First Edition on order not the GT).
Advertisement
You must log in or register to reply here.
Share:
Facebook Twitter Reddit Email Link