tomsnyder_ said:
Space White GTPE - Got it last week too! If Race Red was available, I would have gotten that! Looks great. Plus 1 on the Race Red 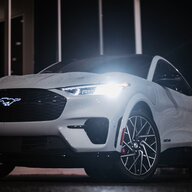 TRP said:
Looks great. Plus 1 on the Race Red
Click to expand...

Could you please elaborate on the seats?
It sounds like you feel they are pretty comfortable other than the shoulder issue you are dialing in - do you know how they compare to the Premium or regular GT seats?
Also, is the passenger seat manual or power? If manual, is it hard to adjust well for comfort? 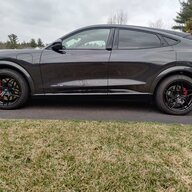 WPJoe said:
Could you please elaborate on the seats?
It sounds like you feel they are pretty comfortable other than the shoulder issue you are dialing in - do you know how they compare to the Premium or regular GT seats?
Also, is the passenger seat manual or power? If manual, is it hard to adjust well for comfort?

Seats are very comfortable and supportive. Both driver's and passenger's have 8-way power. 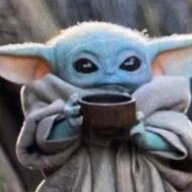 
ElectrifyCLT said:
I’m particularly pleased that it hides the “grill” as well as it does. I much preferred the standard Mach E snout that is body color. DMG effectively accomplishes that.
Click to expand...

this is why i went with DMG GT, i prefer the grill to be the same color as the car. this color camo's that pretty well.
2022 Ice Blue Silver Metallic ER Premium AWD, ordered 9/13/21
2016 Expedition Limited for now. 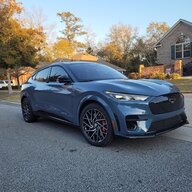 "I'll test this Friday at the track"


Harry, did you make it to the track? What happened?

Jimmy2 said:
"I'll test this Friday at the track"


Harry, did you make it to the track? What happened?
Click to expand...

Oooh, 1 or 2 mph faster than what most others have gotten. 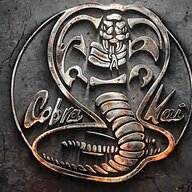 rgreene said:
Didn’t have much time to drive it or take too many pictures since I didn’t get out of the dealership until around 8:45 and I need to get some dinner. I picked up a dark matter gray with pano roof.

Initial impressions:
It’s mostly suburban sprawl here, so not a lot of opportunity to test out the handling and magneride. Im going to find some canyon roads this weekend. That said, it felt pretty planted.

Off the line, it felt fairly quick. Again, not a lot of opportunity yet to push it.

I was in the camp of “I don’t like the PE seats” and was making my peace with that. Seeing them in person is way different than the pictures. I tried to get some more pictures to help demonstrated the material, but you just can’t capture it on a phone camera. Pictures make the seats look “fuzzy” but the material is certainly not. I also wasn’t sure about the shoulder bolsters, but they don’t look (too) bad in person.

My salesman said that the software is preloaded with blue cruise already, so I guess I should try that out, but frankly, I just want to drive it! Love that color. All the colors are good. I went Blue. Sight un seen. 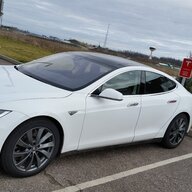 OP, I used to have the tennis ball marker but kept getting in the way and a PITA to move when I got a new car, you may want to look into laser park assist, powers off your garage opener motor outlet, all you need is a broom to angle it to point to the reference spot on dash when you get a new car, mine running 20 years now, looks like this one:
https://www.amazon.com/Fosmon-Activ...9Y2xpY2tSZWRpcmVjdCZkb05vdExvZ0NsaWNrPXRydWU= 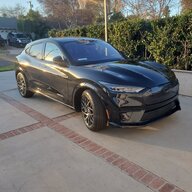 rgreene said:
I got a chance to drive for about an hour without the wife and kids on some nice roads this morning. Some elevation changes, plenty of twists, and some nice patches of California live oaks, a beautiful drive.

I took a few passes on the road to gain confidence in the car and learn the road a bit, as well as try it out in both engaged and unbridled.

it really didn’t take me long to gain confidence in the car, it just felt so sure footed. I can feel that the car is on the heavier side, but it manages it so well, the steering is quick and precise. Tapping the go pedal was quite rewarding, and would break things juuust enough loose to put a smile on your face. I’m still babying it a little bit.

I never felt the car to be “bouncy,” but I wasn’t driving in boring straight lines, or maybe that’s the magneride absorbing the road properly.

This car wants to stretch its legs, no matter how fast you’re going. That’s all I’ll say about that. ?

The only minor complaint that I have right now is how the shoulder bolsters land on my back. They slightly push them forward instead of cradling them, but I think I am still dialing in the seating position. The fixed headrest is not a problem.

I’m probably going to be spending all the money I save on gas on new tires.
Click to expand...

Can the shoulder bolsters be adjusted?
OP
OP

Mike Halleman said:
Can the shoulder bolsters be adjusted?
Click to expand...

No, they are fixed.

rgreene said:
No, they are fixed.
Click to expand...

I had better find one to try the seat out. 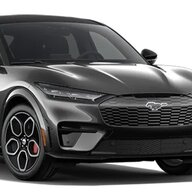 AButtonMasher said:
This is killer. It seems like DMG looks dark gray in the sun and black in the shade. I’m excited for mine! Thank you for the additional pics of DMG.
Click to expand...

GT Performance Edition vs Standard GT worth it?
3 4 5