rzanzerkia said:
Thanks for posting this.
I wish it would say how long before they start delivering remaining MachE's...
@oadesign Looks like our cars are stuck due to above...
Click to expand...

Mine is in this group, my dealer has 5 in the group and indicated we should have our vehicles next week, no guarantee but good information
Advertisement 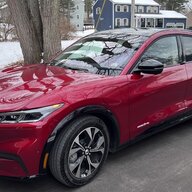 Lola2004 said:
Mine is in this group, my dealer has 5 in the group and indicated we should have our vehicles next week, no guarantee but good information
Click to expand...

An estimated 500 customers scheduled to receive their Ford Mustang Mach-E SUVs in December are still waiting for seat belt repair that must be completed prior to delivery, the automaker has confirmed to the Free Press.

Initially, Ford told the Free Press 2,304 Mach-E vehicles were affected. Of that number, 741 were already in customer hands and 1,563 were being held by dealers, Ford spokesperson Said Deep confirmed Dec. 20.

On Monday, he updated the number of Mach-E vehicles waiting to be fixed.

Right now, the vehicles may have a rear seat belt that could detach and fail to restrain an occupant during a crash on both the Mach-E and the Ford Maverick pickup truck built between Oct. 6 and Oct. 20. Ford did not provide updated data on the Maverick repairs.

In this case, the compliance recall reflects the fact that a supplier produced steel plates with extruded bolt holes that were not within specification, Ford said.

For some Ford customers, the repair issue also delayed delivery of the $7,500 tax credit that people had planned to take in the 2021 tax year. The credit is applied to the year a vehicle is delivered, not ordered.

Meanwhile, the trucking industry has been disrupted by a shortage of drivers and that's adding to delivery delay.
Click to expand...

My mach e gt PE is stuck in this repair recall at the railhead in Atlanta. It has both the windshield and seatbelt recall. It was ordered the first day gt’s cound be ordered in April and has been at the railhead in Atlanta for almost two months with no idea when I may get it.
Advertisement
You must log in or register to reply here.
Share:
Facebook Twitter Reddit Email Link

Seat Belt warning and Seat occupant alert - how to get rid of it.

Initial thoughts of the Mach E after delivery
2

Seat of the pants