Utility of the Mach-E Frunk! 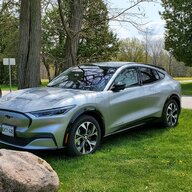 mdolan92869 said:
You must have kicked butt at Tetris!

But seriously, with that added weight up front, did you notice any handling issues compared to an empty frunk?
Click to expand...

To be completely honest the Mach-E carried the weight really well. Mind you I had the family I the car and wasn't exactly running a slalom course. But it felt remarkably composed, and I was even more impressed with the nearly unchanged stopping power under such a heavy load. Whenever I have loaded up any other vehicle I've owned for a similar trip, you knew the car was loaded! In this case, the Mach-E seemed incredibly well composed!

I know it sounds like I'm talking the vehicle up like a fan boy or something, but all I can tell you is to try it out yourself and you'll be surprised how well it does under load!
OP
OP

Lol ???.. I consider anything North American to be domestic since we're pretty close neighbors. 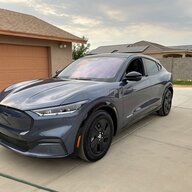 If you want to bring the kitchen sink, you need to get a Rivian. Comes with a frunk too. 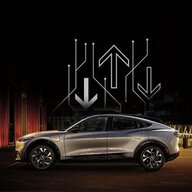 DaMeatMan said:
not to mention the fact that I'm running 235/55/19 CrossClimate2 tires as well, which have a very aggressive tread pattern, and are nowhere near as energy efficient as the stock tires.
Click to expand...

Quick question, we’re you able to mount these tires on the stock rims?

DaMeatMan said:
Lol ???.. I consider anything North American to be domestic since we're pretty close neighbors.
Click to expand...

We're a "bit" parochial on this side of the border. 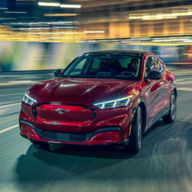 DaMeatMan said:
The grip I get on the road is really like night and day. Particularly when making Jack rabbit starts when turning into another lane. The stock tires would let the back end come lose, and squeal which was fun and looked cool. But at the end of the day I prefer control and superior handling to making allot of noise and putting on a show for pedestrians.. I guess as a parent I'm getting old and "responsible" or something lol. But seriously though, I'm thinking about what if I need to make a quick maneuver on the highway to avoid a high speed collision? I don't want the back end coming out in those conditions, and the Michelin CrossClimate2 seem extremely well planted on the road. The stock tires really seemed very under sized and not up to the task in that regard for this size and weight vehicle.

On the con side of things I have lost a bit of range to where I am now always meeting rather than exceeding the EPA estimates (even at highway speeds). But that was a small tradeoff I think for the better handling, smoother ride, and more confidence I get with the cross climate2 tires. Increasing the PSI to 42 (when sitting cold) helped quite a bit though.

I should also mention that I have noticed that when conditions are just right, I hear like a high pitched sound coming from the front tires when driving at high speed when the wind is coming at me at just the right angle. You can actually feel it in the steering wheel. But basically the tread on these tires are pretty darn aggressive, so I kind of expected that. But for the most part the tires are noticeably quieter believe it or not in 99% of all other driving, as compared to the stock tires which really surprised me.
Click to expand...

Great frunk video, and you really hit the nail on the head when describing the difference between the stock tires and the replacements, the feedback felt in steering wheel, etc. Agree 100% about the rear end coming loose was fun, and my 3yo in the back enjoyed as well the few times I have done it in an open safe area, but the stock tires are really a limiting factor here for emergency maneuvers.

Have a friend who described the exact night and day difference in terms of grip on the Cross Climate 2s when replacing on his EV. I would have gone this route as well, but the Pirelli Scorpion Verde AS Plus II were on a closeout deal and had very similar ratings. For me, the night and day difference with these has been in the road noise! So much quieter now, it's crazy.


Paddler said:
How do you like the CrossClimate tires? My only real complaint with my MME is road noise from the OEM Michelins. I was thinking of the CrossClimates.
Click to expand...

You may consider the Pirelli's if noise is high on your list. Comfort and noise were my top factors, then next was overall grip. I also went slightly wider tires, but got aftermarket wheels and down to 18s. 235/60/18 Pirelli. Very happy with the result

FordMachEGo said:
Quick question, we’re you able to mount these tires on the stock rims?
Click to expand...

Yes, they are mounted on the stock 19" rims and original TPS sensors.

troublebot said:
Anyone know what kind of temperatures the frunk can get to in the blazing hot sun? I keep meaning to throw a thermometer in there and test it. I'd like to be able to throw my backpack in there rather than leaving it in the hatch area when I'm running errands, but I have some electronics in there that I don't want to melt.
Click to expand...

If you find out, let me know. Would be great to slow cook a roast in there on a hot day.

maxmach said:
If you find out, let me know. Would be great to slow cook a roast in there on a hot day.
Click to expand...

A built in drain too. Simply add a recirc fan and you can let the fat drip away and just set it and forget it... I'll show myself to the door now. 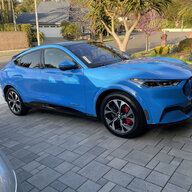 Kamuelaflyer said:
A built in drain too. Simply add a recirc fan and you can let the fat drip away and just set it and forget it...

I'll show myself to the door now.
Click to expand...

I’m waiting, is there more?
—
Mike 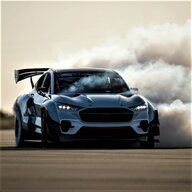 DaMeatMan said:
Yes, they are mounted on the stock 19" rims and original TPS sensors.
Click to expand...

After changing the tires did you notice any change in the "bounce" issue many have noticed on wavy roads? 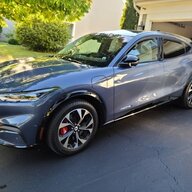 My favorite part of the video: "Plus... a baby can fit in there!"
OP
OP

mkhuffman said:
After changing the tires did you notice any change in the "bounce" issue many have noticed on wavy roads?
Click to expand...

I never had issues with an overly bouncy ride, but it does ride smoother with the new tires. 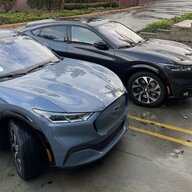 Are new Mach-e deliveries coming without the frunk dividers?

Design of the Mach-E

Modification to prevent loss of the clips that hold the three panels in the "frunk".
2 3

An Affirmation of the Mustang Mach E