Why is Mach-E called a "truck"

Hilarious... I have the thing with All-State in CA. I thought it was just me.

SirronD said:
My insurance company says that my Mustang Mach-E is a "Ford Truck". And when I checked my paperwork from the dealer, it also says "Ford Truck".

Why is the Mach-E called a "Truck"?
Are all CUV's and SUV's considered to be trucks?
Is the Tesla Model-Y (a direct Mach-E competitor) classified as a "truck" by insurance companies?

because whenever you drive a Mach-E you think, "truck yeah, this is AWESOME! 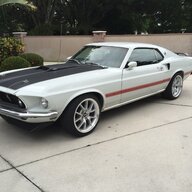 Timelessblur said:
That used to be the case but in 2006 it was change to require SUV to be over 10000lb to get the exemption and pickup truck to be over 8500lb.
You are right that a big reason for the SUV was CAFE
Click to expand...

SUVs started decades before CAFE (like the 1935 Chevy). Then somewhat popular in the 60s (Wagoneer and Bronco). But the modern SUV didn’t become popular until much later (84 Cherokee and 90 Explorer).

CAFE was the reason 60s cars are in collectors garages and 70s cars are at the trash heap. But I don’t really credit it for SUVs.

In modern cars though, CAFE is the reason why SUVs actually ride decent and get decent fuel economy. Until the more restrictive standards, they rode like trucks and got truck fuel economy (since they were based on truck platforms).
Advertisement
You must log in or register to reply here.
Share:
Facebook Twitter Reddit Email Link

Why the Mustang is called a Pony?